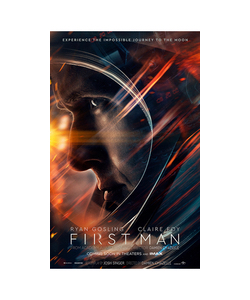 When I first heard about Damien Chazelle’s First Man I was expecting to see another great space movie, something along the lines of Apollo 13 perhaps, or even Gravity. What I got was indeed a great movie (mostly), but it wasn’t a space movie.

This is not a story of heroes going further, going faster, doing things we couldn’t ever expect to do ourselves, this is not a movie about larger than life, perfect people. This is a movie about normal people. Very talented, brave people, but people nonetheless, with strengths and weaknesses, hopes and fears.

You get a sense of the struggles of real people here, not stars, not famous celebrities. It is a story of real lives lived to the maximum, of amazing achievements and terrible tragedies.

The story is so dark in places that I felt brought to the edge of tears at times, and this brings me to the one weakness of the film (such that it is): Ryan Gosling’s portrayal of Neil Armstrong is, a few times, a bit wooden.

Neil Armstrong by many accounts was a very private, emotionally controlled person. Gosling’s version of Armstrong was considered spot on by Armstrong’s two sons. Perhaps it was.

For me, there were times when Gosling seemed emotionless, expressionless, even when awful things were happening in his personal life. Perhaps that was what Neil Armstrong was really like. I don’t know.

What I do know, is that it doesn’t translate to the big screen very well. Also, I think the film would have benefited from being 15 minutes shorter, with a few scenes tightened up. Minor quibbles in an otherwise great film.