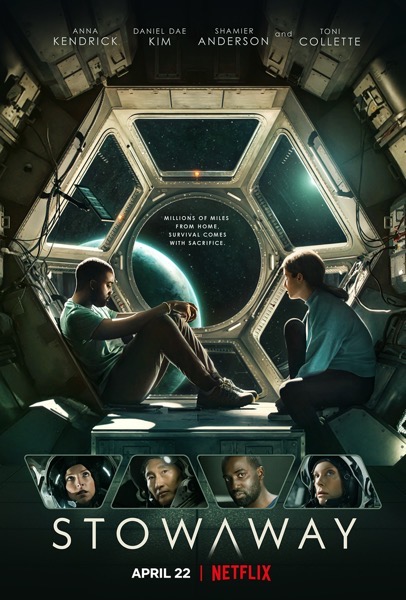 I’ve not felt so strongly about a movie in years. There are spoilers in this review.

First the positive: the scene work, sets, CGI, direction, and general feel of space in this movie are excellent. The acting is equally as good.

What lets this down so badly is the writing. The arc of the story is implausible, and it gives little opportunity for exposition of the four main characters, so we don’t care about them.

Tony Collette’s the Commander seems overwhelmed by the problem that’s happening: numb, panicked, shouting and crying in equal measure. Why is she so weak? What happened to make her like this, and who the hell made her Commander of a two year deep space mission?

And what does she do when they realise there isn’t enough oxygen for all of them? Immediately decide to kill one of the crew. There’s no “exhaust all possibilities”, “cannibalise system X to replace system Y”, or even “hey stowaway, you’re an engineer right, what ideas do you have?”. It’s just “I called tech support and they said nothing could be done so let’s kill one of you”.

And who the heck builds a spaceship with a critical system (life support) with no back up???

Even Anna Kendrick’s noble gesture to give her life for her colleagues means nothing, because a) we don’t know her so don’t care, and b) makes no damn sense because she is the only doctor on the crew. They can live without algae guy, or the stowaway, but it makes no sense to kill the only doctor. Tony, you’re the Commander, and THAT’S the difficult decision you should be making.